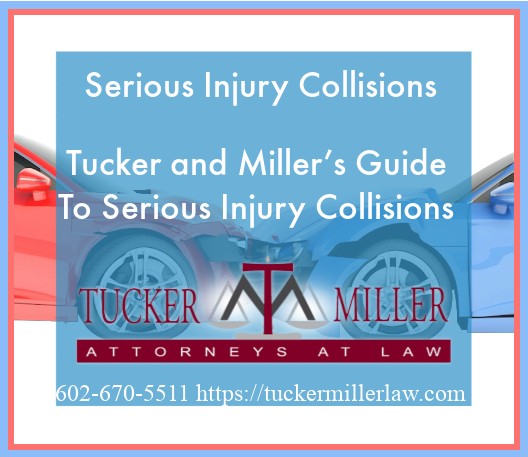 In 2019, there were 129,750 car crashes and 982 were traffic fatalities on Arizona’s roadways. While this number considers all types of traffic-related accidents, high speed collisions tend to have the most destructive outcomes for those involved. Insurance company protocols would like everyone, including prospective jurors, to think that minor impact soft tissue injury claims are without value. This is not true as some people are far more vulnerable to injury due to age, activities or prior injuries that may have healed. The medical profession states there is no clinical correlation between the amount of damage, or the lack thereof is not clinically related to the amount of injury one sustains in a car crash. A defendant, who negligently causes an accident, is legally and financially liable for any aggravation or change in your physical condition caused by said negligence. One could suffer catastrophic injuries or even be fatally wounded. All of this varies on many different factors, including the speed of the vehicle, the weight of the vehicle, what the driver collided with and the length of time between the accident and medical treatment. 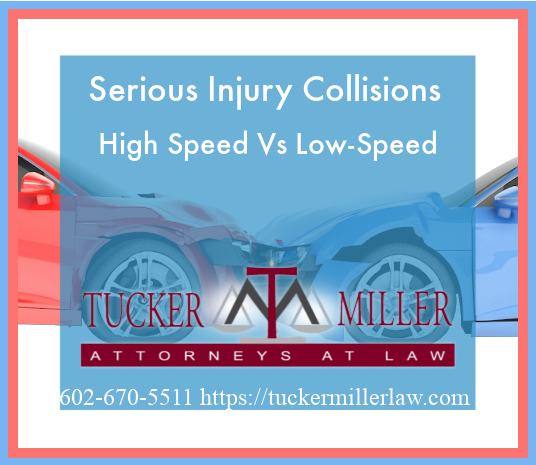 High speed, or major impact, collisions occur when a vehicle is traveling 30 or more MPH and more times than not take place on highways, freeways, and other high-speed roadways. The probability of injury or death in these types of motor vehicle crashes increases with higher speed. Drivers have less control of a motor vehicle moving at higher speeds. The high speed itself may be the cause or a contributing factor to the crash and it also impedes a motor vehicle operators’ ability to take corrective action to prevent a collision accident.

Automobile insurance companies typically want to assess your claim by considering the amount and type of damage caused to all vehicles involved and deciding bio-mechanically if the crash forces produced caused sufficient damage to the vehicle to create an injury producing event. If physical damage to the vehicles is less than a certain dollar figure somewhere around three thousand dollars, or if there is no frame or crush damage to the vehicle the insurance company typically decline to pay costs for medical bills and especially will decline pain and suffering stating that the intensity of the impact was not sufficient to cause bodily injuries.

Serious Injury Collisions And The Injuries of high-speed collisions include:

High speed collisions typically cause the vehicle to be severely deranged causing difficulty in removing accident injury victims from the damaged car. If EMTs cannot remove the injured occupants from the vehicle, radical procedures will have to be applied. The injury victims may be subject to amputation limbs. There are times EMTs or fire fighters at the scene have to utilize “jaws of life” to cut parts of the motor vehicle to extricate the injured.

With high-speed collision crashes there is the possibility of the vehicle catching fire in a high impact, which can result in severe burns to those trapped in the automobile.

Here are some interesting facts for Motor Vehicle Collisions in Arizona 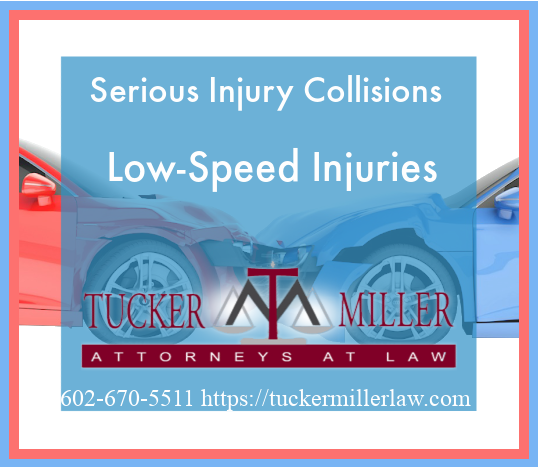 Low-speed, or minimal impact, collisions typically occur in congested road traffic on city streets but can also occur on freeways and highways during rush hour and other high-traffic periods. Most Auto Accidents Occur Between 6 and 12 MPH.

These collisions typically rear-end, or side-impact crashes are in most cases less severe, than high speed crashes but this does not mean one will not suffer severe injuries following a minor impact collision. Even though soft tissue injuries are typical such as whiplash they are the most common type of injury sustained in low-speed collisions. drivers can also sustain aggravation of asymptomatic disk degeneration or other pre-existing injuries, traumatic brain injuries and nerve damage, as well as neck and back injuries. As a result, individuals involved in low-speed crashes should seek medical treatment to ensure they have sustained no serious injuries. A victim with a pre-existing condition who is involved in an accident can sustain severe injuries as a result of a low-speed motor vehicle crash. 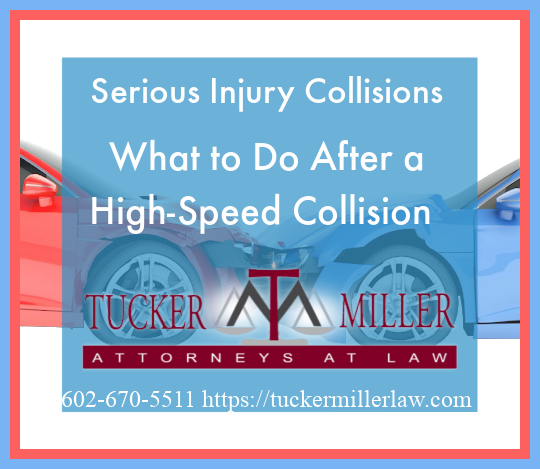 What to Do After a High-Speed Collision: 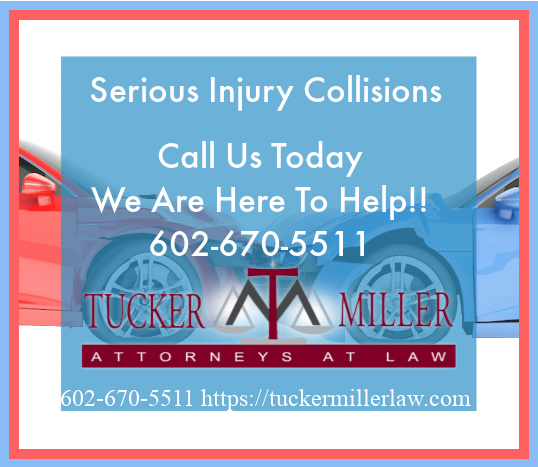 Tucker and Miller Law Firm is always ready to assist your loved ones and family members in representing any heirs of a loved one fatally injured or severely injured in a car or motor vehicle crash as the result of negligent, intentional, unsafe or reckless conduct of others. Tucker and Miller have recovered monetary damages for those who have endured the loss of a parent, child, sibling or spouse, including millions in settlements and verdicts to get full and fair financial reward for the loss of their loved one. 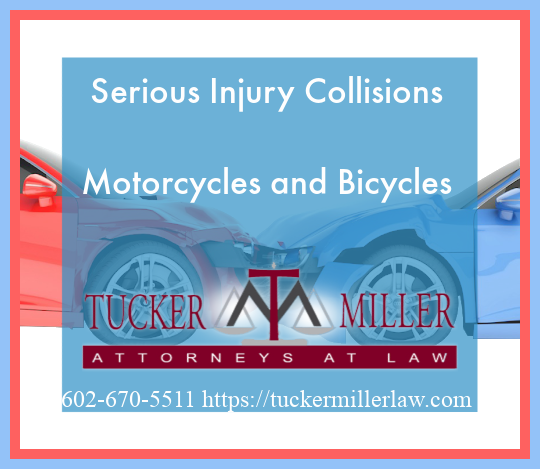 Obviously if you are operating or riding on a motorcycle, moped or in a smart car or golf cart injuries sustained in low-speed or high-speed can be devastating and even fatal.

Tucker and Miller has represented automobile, motorcycle and bicycle riders and pedestrians rammed into by motor vehicles in serious injury cases. All motor vehicle operators must be held liable if they are negligent and violate the rights of other people and/or pedestrians. Motorcycles and bicycles are two types of vehicles that are mainly susceptible in collisions. Over the past 10 years, the number of motorcycle fatalities has continued to rise in Arizona. 2019 saw 170 fatalities which is approximately a 10% decrease from 2018. However, motorcycle and passenger injuries came in at 2,235 on the state’s roadways.

Obviously, it’s well known that motorcycle drivers and passenger riders are more vulnerable to crashes with other motor vehicles. Motorcycle drivers and passenger riders are more exposed to trauma from a collision and have accepted the fact that limited safety apparatus available to them as compared with other motor vehicles, which have seat belts, airbags and are encased in an occupant compartment which is a metal compartment with crumple zones strategically placed to absorb as much of the traumatic forces of a collision. Most of the motorcyclist’s safety equipment available is not fail-proof – according to the National Highway Traffic Safety Administration (NHTSA), motorcycle helmets only are effective in preventing a fatality in 39 percent of crashes. Did you know that there are airbags available for motorcyclists that is an inflatable safety vest that is wired to inflate during a motorcycle crash? During a crash, a triggering mechanism releases compressed gas into the bag. It inflates in less than a second, cushioning your body and organs from the impact. These motorcycle airbags are worn in a vest like fashion.

Most motorcyclists are aware that in general most motorists do not pay enough attention to motorcyclists who share the road with them, and this really increases the danger zone. Here are some other driving activities that endanger motorcycle rider to serious injury collisions 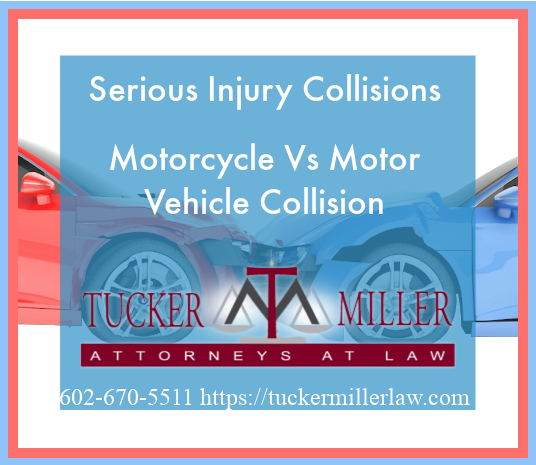 When a Motorcycle Vs Motor Vehicle Collision occurs, whether it is the motorcyclist’s fault or the driver’s, the bike rider is going to endure more devastating injuries than the motor vehicle driver every time. Statistically 80% of all motorcycle accidents result in significant injury or death to the motorcycle rider.

Motorcycle operators and motorists who share the road have a legal responsibility to operate their respective choice of transportation vehicles in a safe manner. Motorcycle riders must realize an intensified duty to watch out for other motorists who may inadvertently be contributing to potentially hazardous driving conditions. However, even if motorcycle riders faithfully follow all of the rules of the road, it does no good if motorists do not do the same. lane splitting in Arizona remains illegal. If a motorcyclist causes an accident because of lane-splitting or trying to overtake another vehicle in the same lane, the motorcyclist will most likely be liable for damages

The most vulnerable to injury in an accident with a motor vehicle are bicyclists. Most Arizona drivers do not know that Arizona law permits bicyclists to use any road that is not expressly prohibited by law. Bicyclists have as much a right to use the state’s highways, city roads and other roadways as motorists. Like all other vehicles on the road, cyclists on bikes are required to yield to pedestrians. In almost all instances, cyclists are required to follow the same rules as vehicles. When riding on the road, bicycles are required to travel in the same direction as the flow of traffic. As with motorcycle riders, many motorists do not pay attention to the location of bike riders on the road and may even been hostile about sharing the road with them. Consequently, bike riders are more susceptible to be involved in a collision with a car, where the likelihood of the rider sustaining serious injury is substantial. 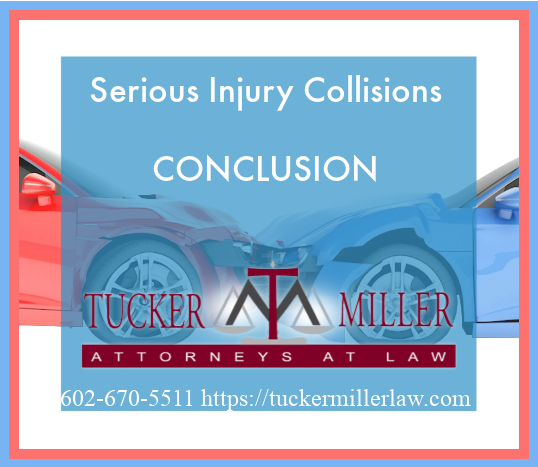 Accidents are more likely to happen when someone is speeding or violating a different traffic rule and/or regulation, like making an illegal lane change or tailgating. In order to decrease the number of low or high impact accidents, anyone using the state’s roadways should operate their vehicles safely and learn to share the road with all forms of vehicle operators – including motorcycle and bike riders. When drivers fail to heed these basic laws, accidents can happen with catastrophic consequences.

Back To The Blog